Using Antetype Cloud, copying the URL of a prototype now directly links to the selected screen – making it possible to open and talk about specific screens immediately.

Clicking a non-interactive area in an uploaded prototype now triggers highlights for areas that are interactive.

On mobile phones, it is now also possible to add a prototype to your home screen (using your browser) and open it in full screen mode to make testing easier.

You can now also save a snapshot of a widget with individual content: By clicking Elements → Create Widget Snapshot, it will save the current content of the selected widget. Once you add another instance using the inspector, it will include all of it automatically (This will be really helpful in combination with the upcoming shared library update).

Apart from that, we've fixed a few minor issues (some regarding live-dragging elements on the canvas) and updated some templates.﻿

This is a small update to improve the overall performance and fix a few minor bugs. 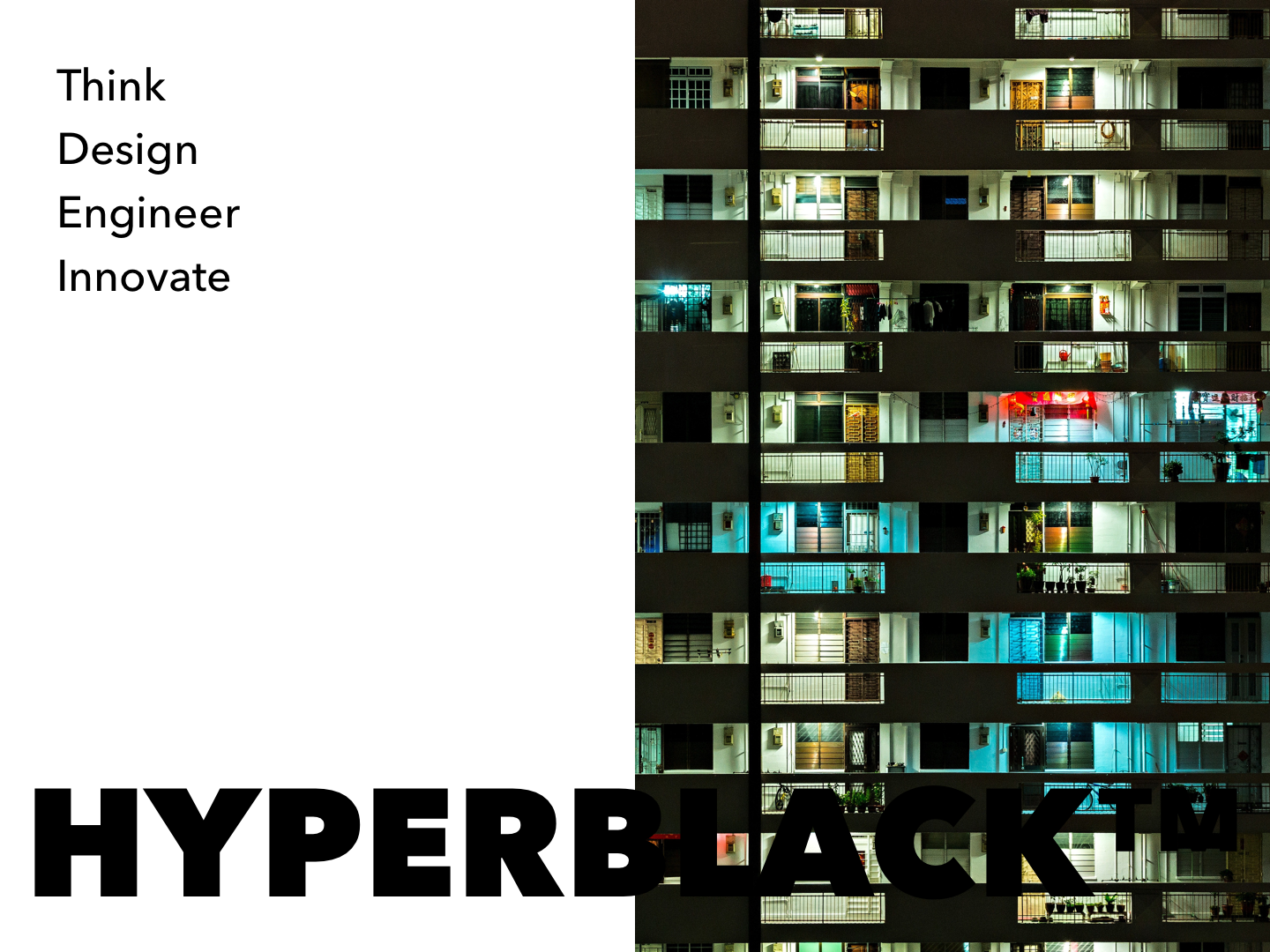 We welcome all new users that joined recently – and we do so with a new interactive tutorial: Advanced Getting Started (Select it from ⌘ + N) will bring your layout and prototyping onto a new level. 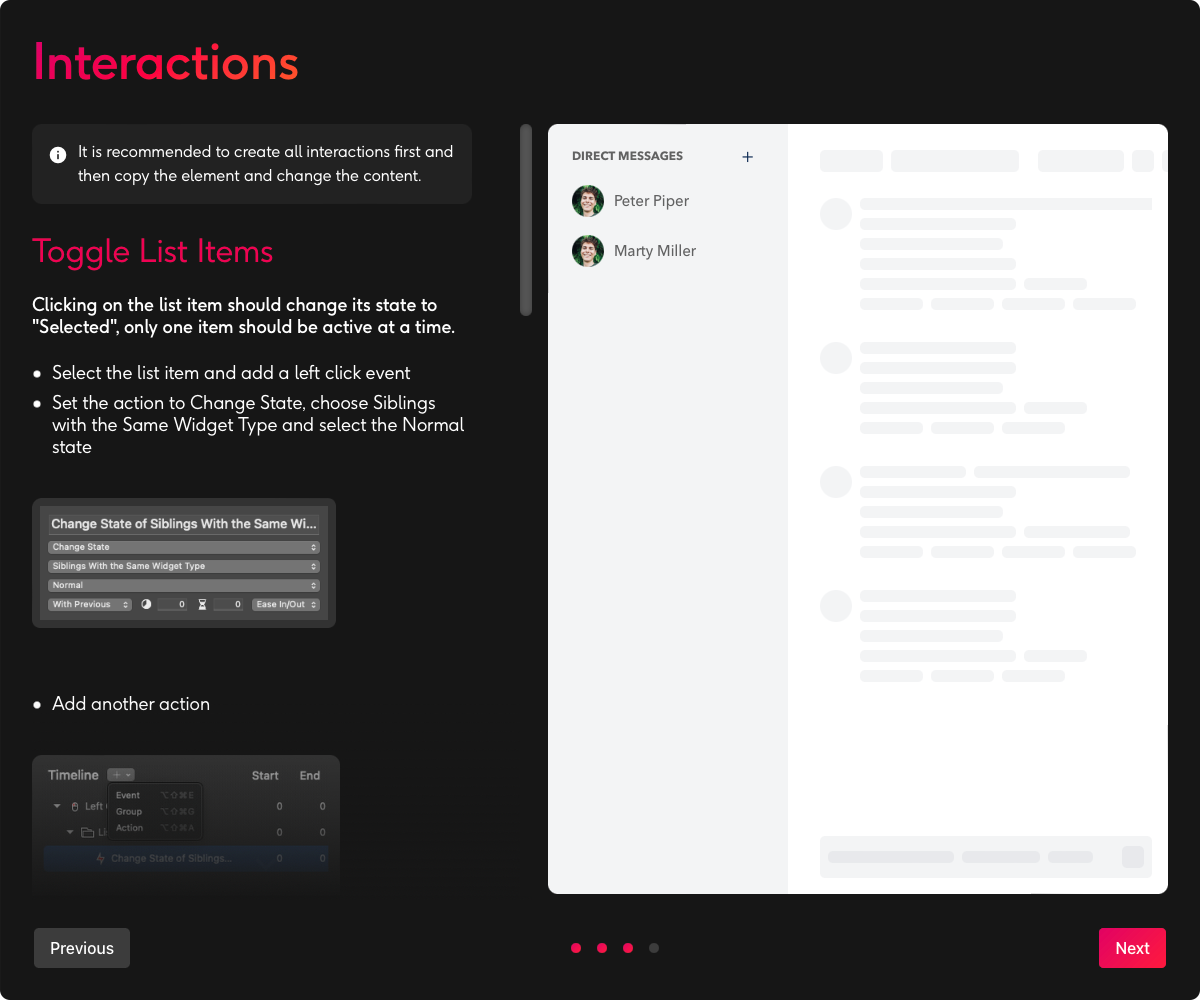 Mouse users watch out: You can now hold down the spacebar to pan around your designs.

We also accelerated your Upload to Cloud speed: Prototypes will now upload more reliable so you can share them even faster.

Selecting elements on the canvas did some funny things in rare cases. We fixed them for everyone's convenience.

Additionally, quite a few big changes happened that we can't talk about yet in detail. A major update is coming soon! It will change the way you work in teams with Antetype. It will enable meaningful collaboration and ensure consistency – and you'll be able to use your company credentials to login and use Antetype with SSO.

If you want to be on the Beta list to test upcoming features before they are released, send a quick mail to chris@antetype.com

Uploading to Antetype Cloud Made Easier

You've asked for it, here it is: You can now add gaps via the layout panel. These will automatically give spacing to any new element you add to that layout – and it works both horizontal and vertical.

Plus: If you enable content wrapping, you will be able to add both dimensions on a single container. It's auto spacing – so you don't need to set margin individually on each element. ﻿

Re-order and Nest Elements on the Canvas

Drag any element, move it to its new position in horizontal or vertical layouts. Move it over other elements, and drop it to nest inside. No need for special containers, it just works everywhere. It's visual. And it's fast.

Too Little Space? Time for Truncation So Users ...

... know there is something more to come: If you check the truncation check box in the text section, ... will be automatically added once your text exceeds the space you gave it. To never miss out on the details.

New users had a hard time starting out with Antetype. With the addition of two interactive tutorials, it will be way easier:

Both come with an explanatory video and then guide you interactively through all the steps needed to do specific things in Antetype. To check it out, create a new file and select the tutorials from the template chooser.

While Getting Started gives a broad introduction to all basic features, How to Build a Card will show you – well, who would have guessed! – how to build a card.

Pro tip: You can find even more guides on how to build specific elements like working dropdowns or input fields in the Antetype documentation. Free of charge, full of fun!

Pro tip 2: These new in-app guides make today a good day to invite your designer friends to try out Antetype. It will be way easier for them now!

It's now possible to open external websites from within your prototype and even inside Antetype itself:

Both will open the specified website in a new window. Ever had that in a prototype? Us neither!

As you know: Designing in Antetype is entirely offline – it will always be possible, even the whole Internet is down. We made sure shared prototypes work just as well: We've added additional security and emergency plans to the entire Cloud infrastructure. This will prevent any lasting outages of your hosted prototypes.

Moreover, some smaller bugs regarding uploading prototypes to Antetype Cloud from within the macOS application have been fixed as well.

We've also fixed a noteworthy bug in the advanced header_include feature that you might be using in some complex use cases. It will work in all scenarios again.

On a side note, we've renamed Layout to Float in the style inspector as it better describes what this section is about. This will prevent confusion on where to find the new Gap feature (see above).

Apart from that, this update also includes 19 smaller fixes, changes and improvements that will make your designing life a little easier and a little faster. We hope you'll enjoy.

The previous update introduced Antetype's new toolbar. It has more options & is more fun. Today's is the day this feature comes to even more users: the new toolbar is now also visible when sharing a Public Link via Antetype Cloud – if you want it to be. You may activate the toolbar, resize mode and the specification inspector individually for each link to meet your requirements. 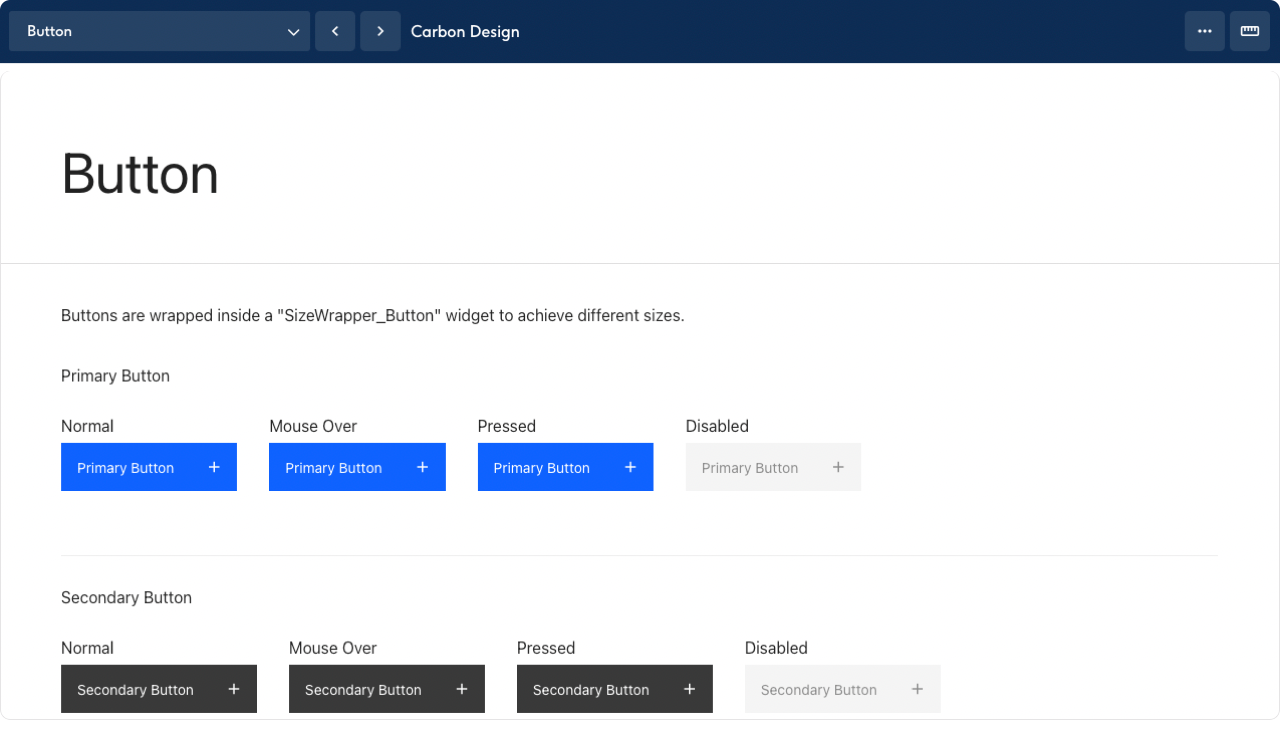 Ever wanted to embed your interactive prototype into another website? There's an option for it now! Simply go to an uploaded prototype card's menu and select Embed Code. This one also comes with individual settings on how you want it to look like. 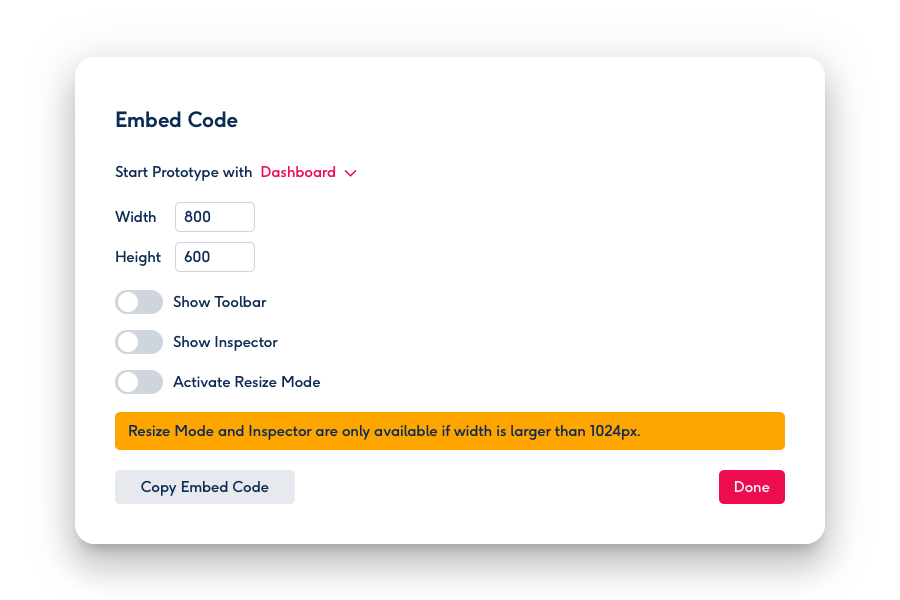 You may now decide what to show when you open a prototype: Do you want users to see the toolbar? The spec inspector? You choose. Of course you can also toggle if you want your prototype to resize to fit the window or not. Plus: Set the starting screen that shows first when you open up the prototype. 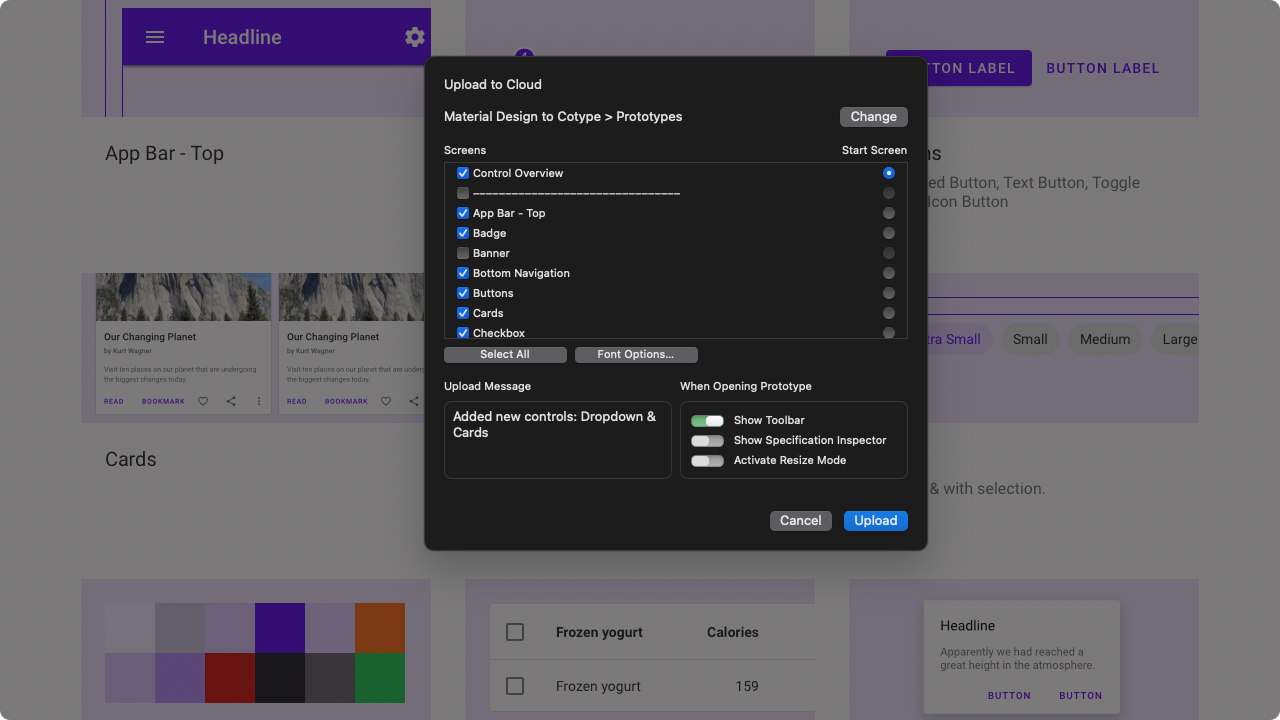 Antetype Cloud's toolbar is now sleeker and optimized for mobile devices. Even better: You may now manage and share your prototypes directly from the toolbar. 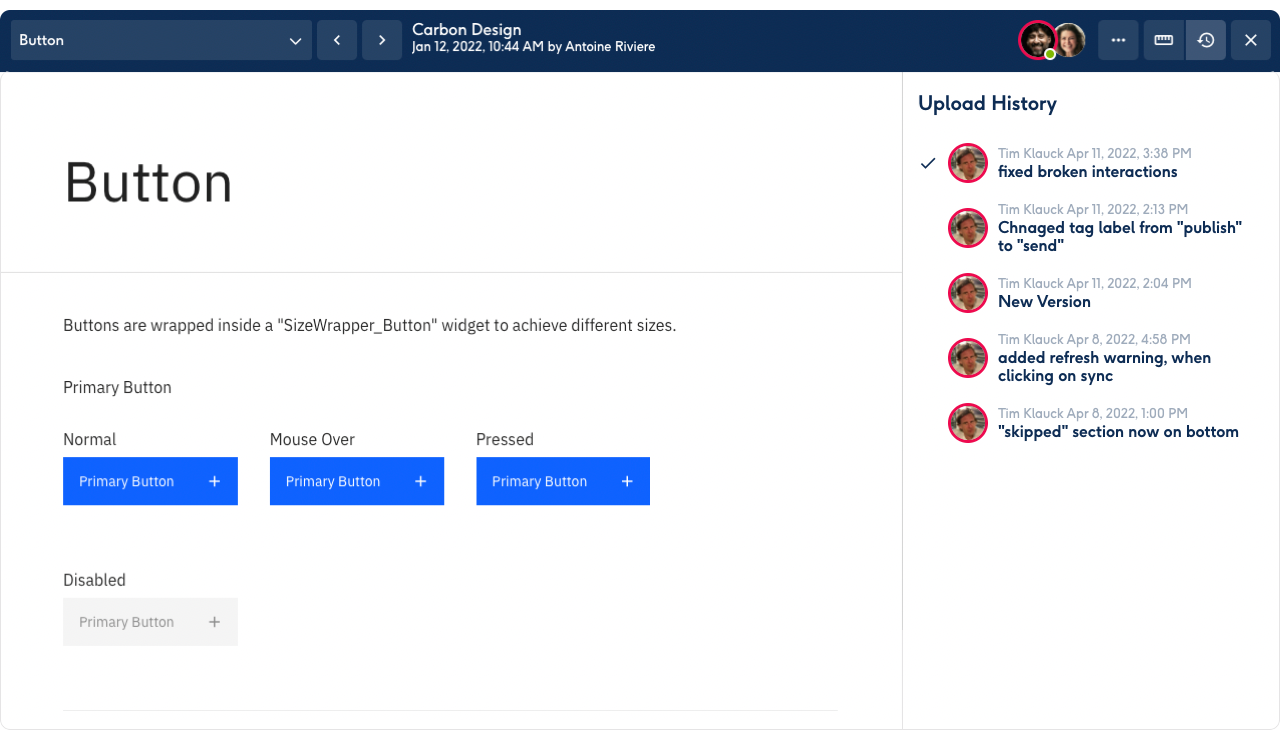 You may also check the file history, what leads us to ...

Easily tell others what changed in the latest version: Give them a quick upload message so they understand what to look for. That also means you can now check and compare a prototype's evolution: See the history, open up previous versions. All done with the new toolbar.

Besides 25 small fixes and improvements, we Improved the performance of opening large files, editing text and uploading to Cloud.

Older changelogs of Antetype updates are available in the community.

Updated 11 Jan 2023
Did this page help you?
Yes
No
Docs powered by archbee